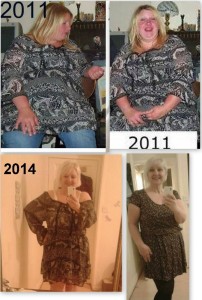 Today I want to let Awne (my partner) tell her weight loss story. Be inspired, face your fears and take action. I haven’t been overweight so I can’t tell a story but I can empathise and provide a service that will help you.

“For anyone worrying about starting one of Paul’s exercise classes and worrying whether they will be the biggest/oldest/slowest there, here is the beginning of my story. I’ve lost 10 stones so far and still have a way to go so I’ll probably be there sweating along with you. My advice is SUCK IT UP! Yes its probably embarrassing (so is having to ask for a seatbelt extension on a plane or sitting in a tub seat in a café and standing up and the seat was firmly attached to your backside, I’ve been there) yes it can be hard and it will most probably hurt but every time you achieve 1 more rep or 1 more second before you collapse the sense of achievement is beyond measure. Everyone will be there with their own story and insecurities so just bite the bullet and get on with it. No one can do it for you!

A little about me…I’ve battled with my weight most of my life. I was just getting to where I wanted to be when I had an accident and broke my back!!! 7 years on and I was well enough to start walking…and walk I did, miles and miles, I was like the walking version of Forest Gump!!

The weight fell off me and with a loss of 8 stones I was looking forward to getting rid of the last 2 stones and getting all my excess skin cut off……….revealing a new and improved me. That was until I took ill and ended up on hormone pills and gained almost all the weight back. Well here I am a year later, 44 years old, 14 stones (probably…I can’t bear to step on the scales yet) overweight, my joints ache, my thighs rub and my bras dig in. I’m a real woman with a normal life and a battle ahead of me, as the title of my blog says I’m sure there will be tears, tantrums and hopefully triumphs. This will be a diary of my journey.

I work in the kitchen of a hotels spa brasserie, I have worked there 3 months which means I now get free use of their facilities including gym and pool (I don’t think so!!) Everyone who works there is thin…I am the only overweight member of staff and I don’t suppose it looks good when people come to a health spa and are served their food by someone who looks like she has never been introduced to a lettuce before. I do eat healthily….mostly but I drink too much and I can quite easily eat 4 bags of crisps a day. Anyway one of the little therapists, a 21 year old, slim, flawless complexioned little darling called Lucy has decided to make me her project. We are going to be gym buddies then I’m going to save up for some treatments and get my face exfoliated off…my body wrapped in strange concoctions and in a year I will be a completely different woman… apparently. I have booked my induction at the gym for a week’s time and signed up for 3 zumba classes a week so this could quite possibly be my one and only blog!

I now need to go and buy myself some size 24 gym clothes, and a sports bra for my 44F boobs, do they make them that big? If not I’m sure I can strap them down with gaffer tape! And probably some Tena Lady!!

Friday arrived along with my induction to the gym at work. I pulled on my big control pants, then my lycra cycling shorts (for added control) and then my joggers, I added to this combo the hugest t shirt I could find and off I went. I arrived a little early to be faced by 2 apparent super models running on the treadmills without breaking one bead of sweat to streak their perfect make up, I was already sweating due to the effort of trying to stop my body from trying to break free of all its constraints!!!

Simon duly arrived and we discussed the usual stuff…health, warm ups, cool downs etc before he introduced me to the treadmill. I stepped on and he set it away, easy I thought as I strolled along…that was until he pressed the + button and I became a power walker, about this time I also became incapable of speech and almost incapable of breath!! This torture lasted for a whole 2 minutes before I was rescued and introduced to the other machines, one being a forward rowing type contraption, Simon sat and showed me where the cushioned pad had to rest on my sternum….ok a 44F chest and a bra with reinforced scaffolding…finding my sternum was gonna take some adjustment and probably a couple of elastic bands but I smiled gracefully as the cushioned pad disappeared into my cleavage.

Most of the weights were no problem and I was a little impressed at how strong I actually was! Ok I thought, almost done, until he walked me over to a huge rubber ball, ‘have you used an exercise ball before’ he asked I explained I hadn’t even been in the same room as an exercise ball before and his reply was ‘sit on it’ NO!!! ‘Sit on it’ NO IT WILL BURST!! ‘SIT ON IT’!!!! I had visions of sitting on the ball and my ample bottom touching the ground but sit on it I did and to its credit it put up a good fight. I was told to lie back and do 20 crunches…little tiny movements with my tummy, after 5 my whole body decided it was now in shock and started to have some kind of exercise induced spasm as I started to shake all over….strangely this is a sign that you are doing it correctly or so Simon says 😉 That was it, I was shown some important stretches and sent on my way with free reign to do it all by myself next time!!

I actually attended the gym twice as around that time I moved house and joined a ‘man gym’. One of the trainers said he would train me once a week if I allowed him to use my photos. I discovered that lifting heavy things burned off way more calories than pootling along on a treadmill and in a very short time. Then I met Paul and even though I was strong I wasn’t very fit so eventually started going along to his classes. They are over very quickly and you can see improvements every time you go. You have a laugh and seriously you won’t be jumping or bouncing or anything that makes you have to hold bits of your body down. Hope to see you there (I’m the one who has to run for a wee every 2 minutes).

Let me know if this inspires you.