To be skinny or not to be skinny, that is the question?

Body and Mind Fitness/Blog/To be skinny or not to be skinny, that is the question? 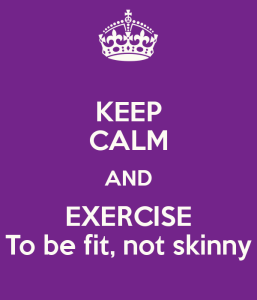 This week has thrust the fitness industry well and truly into the spotlight with the controversy of a misplaced banner.

Why was it so controversial?

Well, it featured two images of women (in animated format may I add, not real photos). One image was (let’s say) ‘larger’ than the other, signifying an overweight person and a ‘skinny’ person!

The whole gist of the banner was to inform women looking at it that they could ‘look better naked’. I was a little confused however, as the ‘skinny’ image was actually not naked and seemed to be wearing a bikini!

Here is a link to the article on The Telegraph’s website –> http://www.telegraph.co.uk/health-fitness/body/skinnypigs-saga-shows-everything-wrong-fitness-industry-today/

I obviously have no issues with fellow fitness professionals promoting their classes. In fact, I like to encourage my ‘competitors’ so that we all provide a great service to help as many people as we can get fit and stay fit.

I don’t even have an issue with what fellow fitness professionals promote on their banners – as long as it’s ethical and genuine and does not offend anyone.

Here lies the issue with this particular banner though. Some people disagreed about the positioning of it outside a school, saying it portrayed the ‘wrong’ body image to children.

This all started on Twitter and the snowball kept on rolling collecting more and more snow on its way!

I tried to follow the Twitter feed and it developed into a bit of a slanging match between the company owner and a few women who had objected to the banner.

It has since made local and even national news – The Daily Mail, The Telegraph, The Daily Mirror etc. I heard about it on Radio Newcastle. It was spread across Facebook and various other social media platforms. It became a huge news story!

It turned a bit nasty too though and that is never going to do anybody any favours. Tweets were flying back and forth between the company and various individuals – insults even.

Putting that into perspective, it sort of gives all of us in the fitness industry bad press. Maybe people will think we’re all in it for the same reasons. Now, I have absolutely no issues with this particular company. In fact, I welcomed one of their instructors into my unit to see if I could help them out trying to find additional venues for their classes.

I do like to see us all succeed as I believe we offer something different to distinctive groups of the community.

Personally, I do not go with the ‘skinny’ persona for my classes. I train women who are proud to be whatever shape or size they want to be. In light of the recent controversy, this is very important as far as I’m concerned.

Further reading of additional Tweets and Facebook posts, I discovered that other local fitness professionals were also on the warpath. The ones into building women’s strength and muscle tone by promoting weight training. Rather like my own business but I avoided getting involved in any onslaught.

Let’s just say it got a bit ‘tasty’ with the infighting!

What I would like to suggest to all fitness professionals is this: Let’s stop this now!

Personally, I reckon all fitness professionals and fitness business owners should stop any bickering. It seems it’s becoming an ego battle rather than concentrating on what we should be doing well and that’s helping as many people with their health and fitness goals.

Whatever you offer in your classes; whether it’s weight loss, strength training, improved cardio function, recovery from injuries; the crux of the matter is that you should have the welfare of your clients at heart.

Let’s stop criticising professionals in our own industry. It has to stop, otherwise who can people actually trust when it comes to them choosing a respectable and knowledgeable fitness trainer?

Social media is a fantastic tool, if used in the right way. However, as seen in the last few days, it can destroy people’s reputation and even livelihoods. There is no room in this world for threatening behaviour, even if people did disagree with this particular company’s advertising. The business owner did not deserve to receive some of the insults and threats I’ve read.

It’s very easy to rant and criticise behind a monitor. I’m just wondering if the same conversations would occur face to face?

So fellow fitness professionals; please let’s stick together and support each other.

As for this whole saga, I’d suggest that people make up their own mind when it comes to choosing a fitness class, a gym, a Personal Trainer or any other fitness professional.

Of course, the advertising helps a great deal and if targeted in the right areas, it works out for everyone.